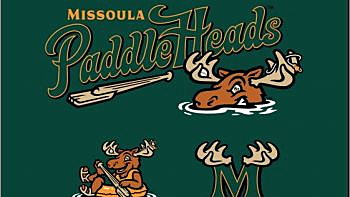 The Missoula PaddleHeads – known to many fans as the former Missoula Osprey – may have won the Minor League Baseball’s “Best New Look” logo contest, but the home office still has many new logos to install in Ogren Park before the first 2020 home game in June.

“We’re all very proud of the brand and it’s something that we’ve all worked hard to create for Missoula,” Taylor Rush, marketing and public relations director, told the Missoula Current. “It felt kinda David and Goliathy, for lack of a better term.”

The Paddleheads, affiliated with the Arizona Diamondbacks, play in the Pioneer League. But the front office competed as the smallest market in the rebranding competition.

“We have a great following, especially for our market size,” added Rush. “These other teams have sometimes 3 or 4 times the market size.”

The home office wins nothing except the honor of saying it beat the bigger guys – and the PaddleHeads have yet to hit the diamond since the name change last winter.

“It’s really just for bragging rights,” said Rush. “There is an inherent benefit: we’re all over Minor League Baseball social media today. The pride and the bragging rights are more than enough for us.”

Even as grumblings continue around town concerning the name change, PaddleHeads Vice President Matt Ellis regaled supporters of the rebranding.

“We thank our fans, community, state, and players for your inspiration to help us create a brand and a series of logos that represent Missoula’s lifestyle, celebrates our natural surroundings, and conveys our community’s heart and soul,” said Ellis in an announcement on the team website.

“This national honor validates the hard work put in by all that helped us create this successful brand,” Ellis added. “I feel the rest of the country has a better understanding of our great community as a result.”

Rush did not give specifics on the cost to transition from the former Osprey logo to the new and longer PaddleHeads – which means moose antlers – a play on moose recreating in area waters.

“Without getting into all of our numbers, I can tell you it’s a lot,” Rush said. “If you look at small things from business cards to team stationery to stickers on the windows to signs in the ballpark … we basically have an entire environment that needs to be enacted.”

Rush estimated the staff has converted 100 of 300 logo items, signs, sales promotions and tickets so far. He would not divulge the finalized team budget for the year, but said all rebranding must be done before the first game on June 19.

However, rebranding has been expensive for the front office.

“It’s one of those things where it really depends on what our vendors do for us,” said Rush. “It’s kind of tough to give a number. Our signage budget is about four times what it was for a typical year.”

Over 1,000 name submissions flowed into the office during the public suggestion period last January. But many names were disqualified due to trademark laws and watermarks, for example.

“It’s one of those things we’ve heard people say, ‘Yes, I’ve heard that all the time’ and others who said, ‘We’ve never heard that.’ It’s a combination,” said Rush.

“We’re also not upset if people say they haven’t heard it before. We’ve got a brand and identity that is very unique and original. We’ve carved our own space here.”

According to Rush, the success of the old Osprey logo paled in comparison to what he foresees the splash PaddleHeads will make.

“Annually, minor league baseball would (run) a favorite hat logo contest with all 160 teams,” he said. “Each of the last three years, I can say without a doubt, we finished 140th or lower.”

To appease the staunch Osprey birders in the stands, the front office plans to celebrate the old brand with two Throwback Thursdays at the ballpark this season, when players and staff will don Osprey caps and jerseys.

“It could have more energy, it could have more life,” he said the rebranding committee and Brandiose consulting firm decided. “We thought it didn’t really represent the culture of Missoula and western Montana. We have a beautify, awesome community filled with outdoorsy, friendly people.”

The committee consulted with other rebranded teams and wanted locals and out-of-staters to better recognize the Missoula team and its home.

“A lot of people don’t recognize how awesome it is here,” added Rush.